Achieving a good and comfortable cycling speed is almost every cyclist’s goal!

Once you begin pedalling, you would want to build a momentum that would allow you to establish that desired speed. But before burning every amount of your energy to hit your goal, you must first know the ideal average speed rate appropriate for your age and understand how it matters to you.

Here’s what you can read through in order to know the average cycling speed in age and numbers.

Cyclists maintain an average speed measured in the distance travelled over the time utilized. So it means the faster you move, the higher your speed and vice versa. Many factors affect your average speed, like the chosen route, the terrain you take, the road surface, traffic, and the distance.

Also, factors like bicycle efficiency and weather conditions, especially when approaching a stiff wind, require an exemplary push skill that affects your speed. Similarly, your fitness level, weight, and even your age are important determinants of your speed.

Given these multiple factors, it is a challenge to establish a constant speed; instead, it is safer to set an excellent average speed as follows:

These said numbers are the ideal average speed, yet, hitting them would still depend on your age and other factors.

Speed and The Resistance Forces

Measuring a cyclist’s speed depends on your athletic performance as you age and what factors are at play.

It is easy to associate your performance with your age, but undoubtedly, you can attain peak performance at any age in your cycling journey.

However, this performance comes with resisting forces that make way and indeed affect your speed, and these are:

Aerodynamics is the movement of air around things like a moving cyclist on a bike. It is essential to consider this force since it matters much to the cyclist’s movement. An efficient aerodynamic will streamline the air to enable a smooth cut and make the cyclist move faster at a lesser effort.

And that is where an aero bike comes into use; with its geometrical makeup, it allows a good rider positioning of the air at any given situation or any terrain that a cyclist traverses.

So, if you want to make good use of your speed, better look at both you and your bike’s weight.

When you want to establish an excellent average speed, tire rolling resistance is a significant factor to look into.

It is the energy your bicycle needs to make your tires move; in other words, it is the tire’s effort to keep it rolling whenever it makes contact with the road surface. You can not avoid this resistance, but you can minimise it by using specially engineered tires known as low rolling resistance tires.

All these and other resisting forces make a critical factor in determining your average speed age-wise.

Your Age Vs. Speed Performance

Average cycling speed by age depends on cycling performance after a certain point. Age is indirectly linked to average speed, but the fact remains that it is not the only indicator of hitting a good number.

There’s even a perception that sportspeople, including cyclists, experience a decline in performance when they reach their mid-to-late 20s, and cyclists are believed to be rarely competitive by the time they reach the age of thirty-five.

However, research published by the Journal of Physiology released by the US National Library of Medicine National Institutes of Health found that an athlete’s musculature has only a minimal decline in physiology when it reaches the age of fifty.

And it is this period that starts a potential decrease in athletic performance and a progressive and steep decline after sixty years. At the same time, the peak of endurance of an athlete is maintained up until thirty-five years old.

And that explains why the peak of speed that a cyclist gets is parallel to its endurance performance. Look at this graph for a more straightforward illustration. 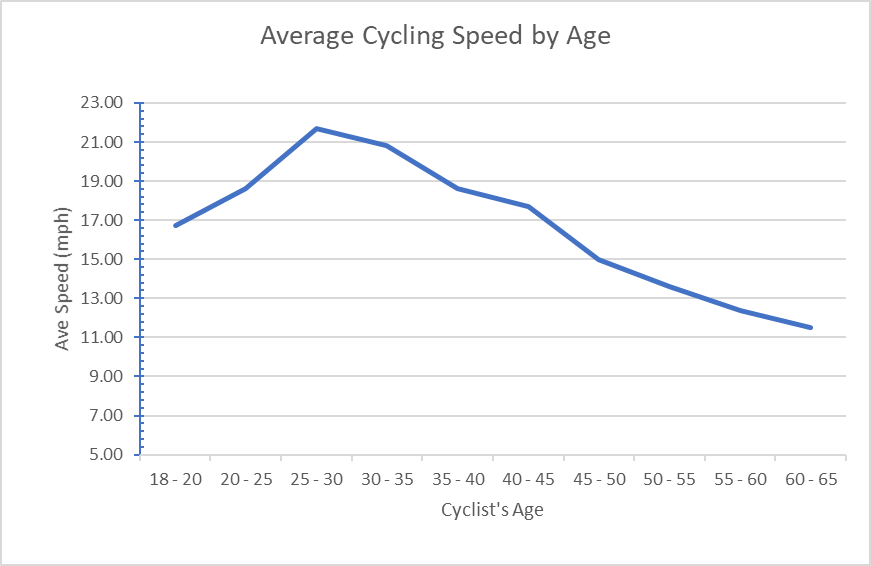 Age and Speed: Are These Numbers Important?

If you are in a competition, numbers play a huge role in winning. But in any sport, you always want to be the best and hit your target numbers.

In cycling, you always want to hit the best average speed at the peak of your age, between 25 – 30 years old.

However, some people are not as competitive or physiologically and physically gifted as others, so a late peak in speed is experienced later.

And there’s no problem about it in any way, only that you would end up putting more pressure on yourself that might not be healthy and not as conducive for you as it should have been earlier in life.

But if you want to achieve those numbers, it would greatly help you to practice the following and learn the right attitudes that would bring you to where you want to be, and these are a few of them:

At the end of the day, the main point of cycling is to enjoy the great outdoors, and numbers, watts, speed, and age play an important role but should not deter you from attaining your goals of riding the distance, no matter short or long.

About Biking For The Wild

Hey all! At Biking For The World, we're nuts about cycling, bikepacking, commuting and all things bikes! The site is dedicated to getting to know the in's and out's of biking and just enjoying the fantastic thing that cycling actually is! Learn more about us here.

Biking For The Wild is a participant in the Amazon Services LLC Associate Program, an affiliate advertising program designed to provide a means for me to earn fees by linking to Amazon.com and affiliated sites.